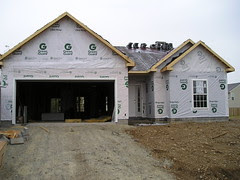 A few months ago I covered the topic of houses and communities not being completed due to bankrupt builders who have become victims of the housing market.

Mainstream media is finally catching up to us bloggers in describing the topic.

It's not only a nightmare scenario for buyers whose dream homes are not being completed, but what about the folks who've already moved in and have unfinished home sitting on either side of them?

Be smart out there.

image credit: dospaz on flickr
Posted by Ryan at 9:02 PM

Get Monthly Updates Emailed To You: